The total-NFkB kit detects cellular NFkB, and can be used as a normalization assay for the p-NFkB kit. It is a leading product in cancer and inflammatory research.
Voir plus d’informations
Télécharger les protocoles

Total NFkB kit serves as a normalization assay with our Phospho-NFkB kits. NFkB (Nuclear Factor Kappa B) is of great interest in cancer research and a key player in the inflammatory response. The buffers of both HTRF phospho- and total NFkB assays are compatible, enabling an analysis of the phosphorylated and the total protein populations from one lysate sample.

Nos distributeurs
The Total-NFkB assay quantifies the expression level of NFkB in a cell lysate. Contrary to Western Blot, the assay is entirely plate-based and does not require gels, electrophoresis or transfer. The Total-NFkB assay uses two labeled antibodies: one coupled to a donor fluorophore, the other to an acceptor. Both antibodies are highly specific for a distinct epitope on the protein. In presence of NFkB in a cell extract, the addition of these conjugates brings the donor fluorophore into close proximity with the acceptor and thereby generates a FRET signal. Its intensity is directly proportional to the concentration of the protein present in the sample, and provides a means of assessing the proteins expression under a no-wash assay format.

The 2 plate protocol involves culturing cells in a 96-well plate before lysis then transferring lysates to a 384-well low volume detection plate before adding Total NFkB HTRF detection reagents. This protocol enables the cells' viability and confluence to be monitored.

Detection of total NFkB with HTRF reagents can be performed in a single plate used for culturing, stimulation and lysis. No washing steps are required. This HTS designed protocol enables miniaturization while maintaining robust HTRF quality.

Human and murine cells in serum-deprived cell culture medium were plated at 40,000 cells per well in a 96-well plate and incubated for 24h at 37°C, 5% CO2. The phosphorylation state was induced by a 10 min stimulation time with 10 nM TNFalpha or 2 nM IL1beta. After stimulation, medium was removed and cells were lysed with 50 µL of lysis buffer for 30 min at RT under gentle shaking. 16 µL of lysate were transferred into 384-well sv white microplate, and 4 µL of the HTRF total NFkB detection reagents were added. The HTRF signal was recorded after an overnight incubation.

Human HeLa cells were cultured for 48 followed by TNFalpha stimualation. Following lysis, soluble fractions were collected after centrifugation. Serial dilutions of the cell lysate were analyzed side-by-side by Western Blot and by HTRF. Results show that HTRF total-NFkB cellular assays is more sensitive than the Western Blot, as 1 000 cells are sufficient for minimal signal detection when using the HTRF total-NFkB assay while 4 000 are needed for a Western Blot signal. HeLa cells were plated and cultured for 24h before being exposed to ncreasing concentrations of TNFalpha. Following cell lysis, 16 µL of lysate were transferred into a 384-well sv white microplate and 4 µL of the phospho-NFkB (Ser536) or total NFkB detection reagents were added. The HTRF signal was recorded after an overnight incubation. Stimulation with increasing concentration of TNFa induces phosphorylation of NFkB, while the total amount of protein, unphosphorylated and phosphorylated, remains stable.

Prolonged exposure to BAY 11-7085 induces a downregulation of the NFkB expression level, as shown by the decrease of the HTRF total NFKB signal. Phosphorylation of NFKB also declines with increasing BAY concentrations. Consequently, the normalization signal calculated from phospho- & total NFkB level remains stable. 40,000 cells of the U937 cell line were stimulated by increasing concentrations of BAY 11-7085 for a 3 hours, and co-stimulated for 10 min with 10 nM TNFalpha. Cells were lysed and transferred into a 384-well sv white microplate for detection of both HTRF phospho and total NFkB.

NFkB is in a super-family with 5 members and consists of two subunits of either homo- or heterodimers that are involved in the regulation immune respose. Two main NFkB pathways exist. The classical pathway involves p65 & p50 and is stimulated by cytokines or TLR activation. The alternative pathway is mainly activated in lymphocyte generation. Inactive NFkB dimers are sequestered in the cytoplasm. Upon stimulation, the IB proteins are phosphorylated, ubiquitinylated and degraded, which activates the NF-B complex, causing it to translocate into the nucleus. Activated NFkB helps mediate gene expression, inflammatory response, cell survival and cellular proliferation. Deregulation of NFkB pathways have been found in several auto-immune disorders but also in some types of cancer.

In collaboration with Sanofi - Présentations scientifiaues

Biomarker and Cell Signaling Assays for Fibrosis and NASH

HTRF assays for Oncology and Inflammation

Signaling in the immune system - Brochures

One technology across all samples - Notes d'application

Implement HTRF phospho-protein assays at every step of the drug discovery process, from in vitro to in vivo models

How to run a cell based phospho HTRF assay

What to expect at the bench - Vidéos

Unleash the potential of your phosphorylation research with HTRF

Unmatched ease of use, sensitivity and specificity assays - Vidéos

Cell-based kinase assays in HTS ? potential and limitations for primary and secondary screening

In collaboration with Bayer - Présentations scientifiaues

cGAS-STING signaling pathway from A to Z - Brochures

All your HTRF assays in one document! - Catalogue

Explore the whole STING pathway with a single technology - Posters

How HTRF compares to Western Blot and ELISA

Get the brochure about technology comparison. - Brochures

STING, the next candidate for cancer immunotherapy

A Guide To Current Therapies in Immuno Oncology

A solution for phospho-protein analysis in metabolic disorders - Posters

Unleash the potential of your phosphorylation research with HTRF

A fun video introducing you to phosphorylation assays with HTRF - Vidéos

How to run a cell based phospho HTRF assay

3' video to set up your Phospho assay - Vidéos

Advance your research on Fibrosis

Seeding and lysing recommendations for a number of cell culture vessels. - Notes techniques

Choosing the right microplate reader ensures you’ll get an optimal readout. Discover our high performance reader, or verify if your lab equipment is going to be compatible with this detection technology.

STING, the next candidate for cancer immunotherapy 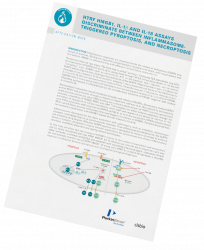 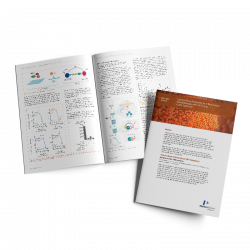 Assay kit for the detection of Phospho-NDRG1 (Thr346)

Phosphorylation of mTor and Akt followed with HTRF cellular asasys